The Human Genome Project ended with the completion of the human genetic sequence. Still, functions of each gene are mostly unknown. In this laboratory, we focus on the genes expressed in the brain and investigate behavioral functions of the genes by conducting a comprehensive behavioral test battery on genetically-engineered mice. 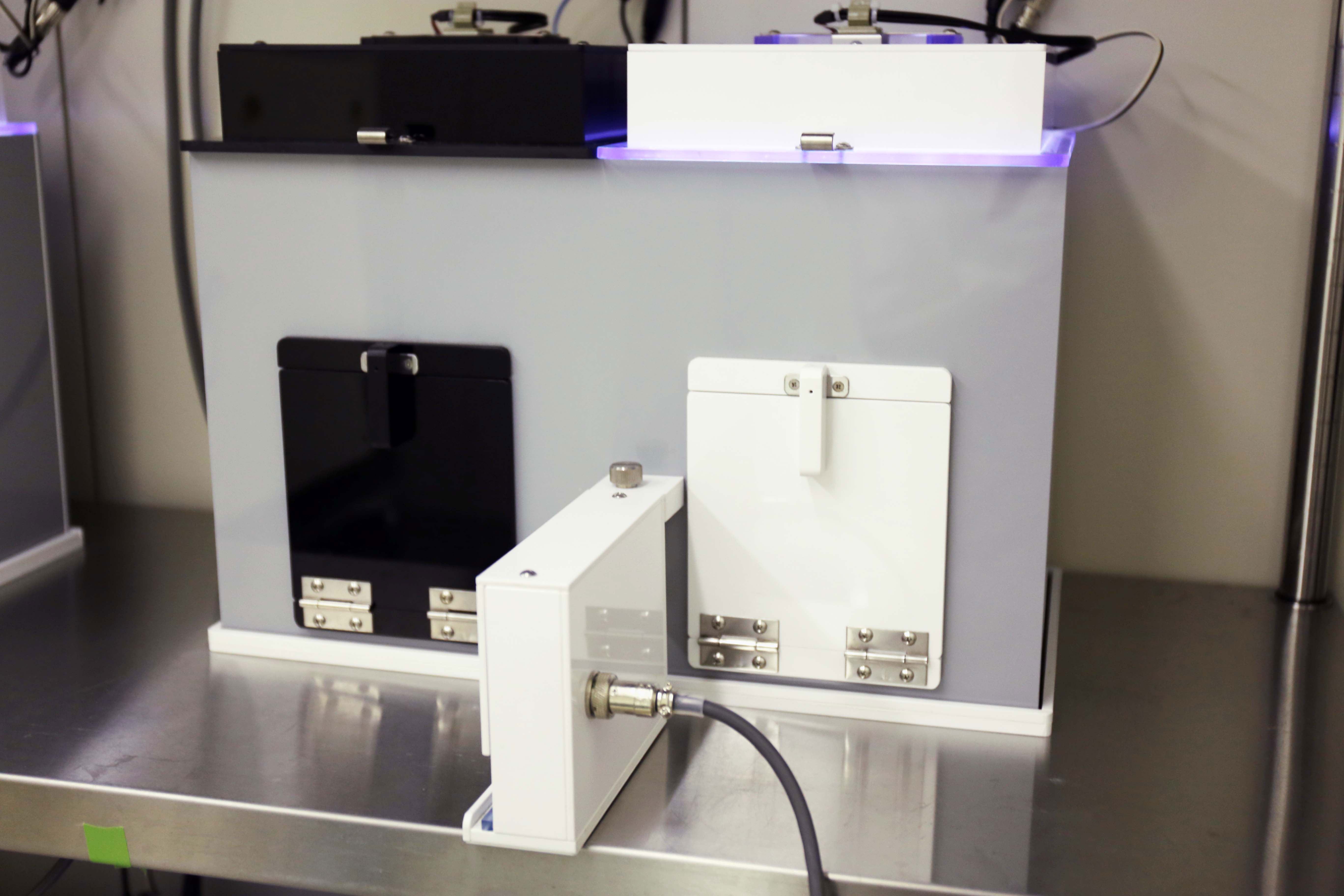 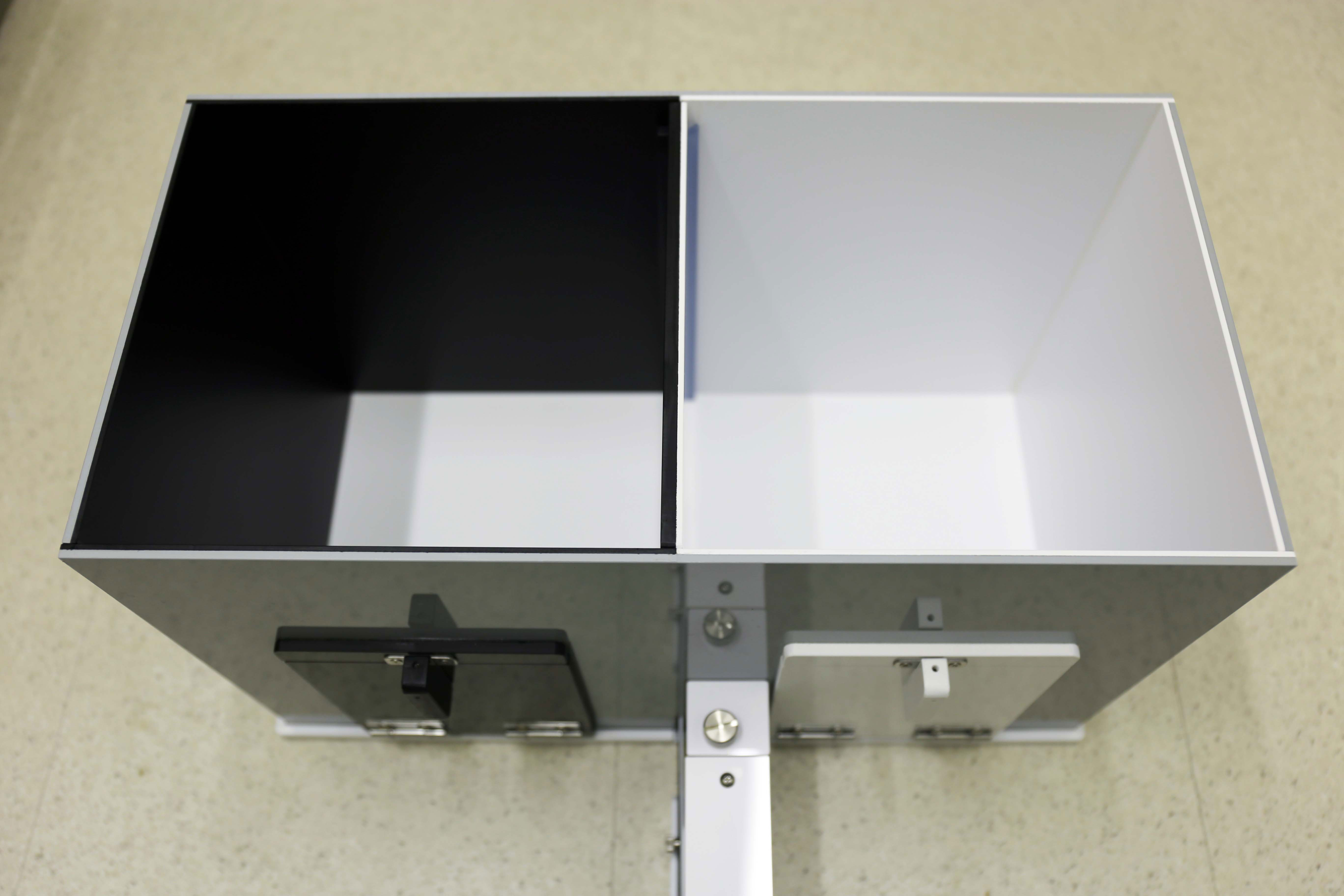 Light/Dark Transition Test
The light/dark transition test is one of the most widely used tests to measure anxiety-like behavior in mice. The test is based on the natural aversion of mice to brightly illuminated areas and on their spontaneous exploratory behavior in novel environments. The test is sensitive to anxiolytic drug treatment. The apparatus consists of a dark chamber and a brightly illuminated chamber. Mice are allowed to move freely between the two chambers. The number of entries into the bright chamber and the duration of time spent there are indices of bright-space anxiety in mice.
Takao, K., Miyakawa, T. Light/dark Transition Test for Mice. J. Vis. Exp. (1), e104, doi:10.3791/104 (2006). 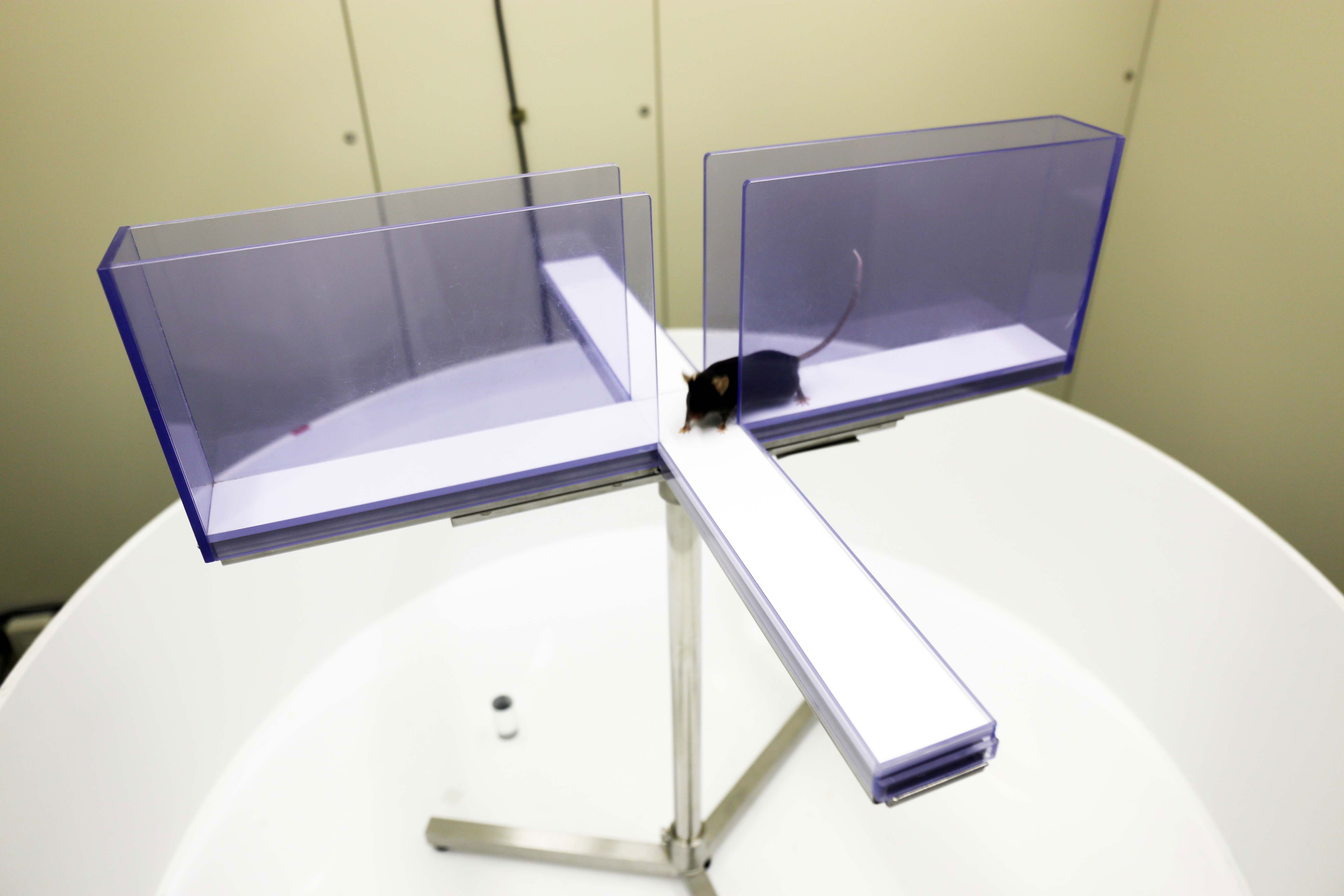 Elevated Plus Maze Test
The elevated plus maze test is one of the most widely used tests for measuring anxiety-like behavior. The test is based on the natural aversion of mice for open and elevated areas, as well as on their natural spontaneous exploratory behavior in novel environments. The apparatus consists of open arms and closed arms, crossed in the middle perpendicularly to each other, and a center area. Mice are given access to all of the arms and are allowed to move freely between them. The number of entries into the open arms and the time spent in the open arms are used as indices of open space-induced anxiety in mice.
Komada, M., Takao, K., Miyakawa, T. Elevated Plus Maze for Mice. J. Vis. Exp. (22), e1088, doi:10.3791/1088 (2008). 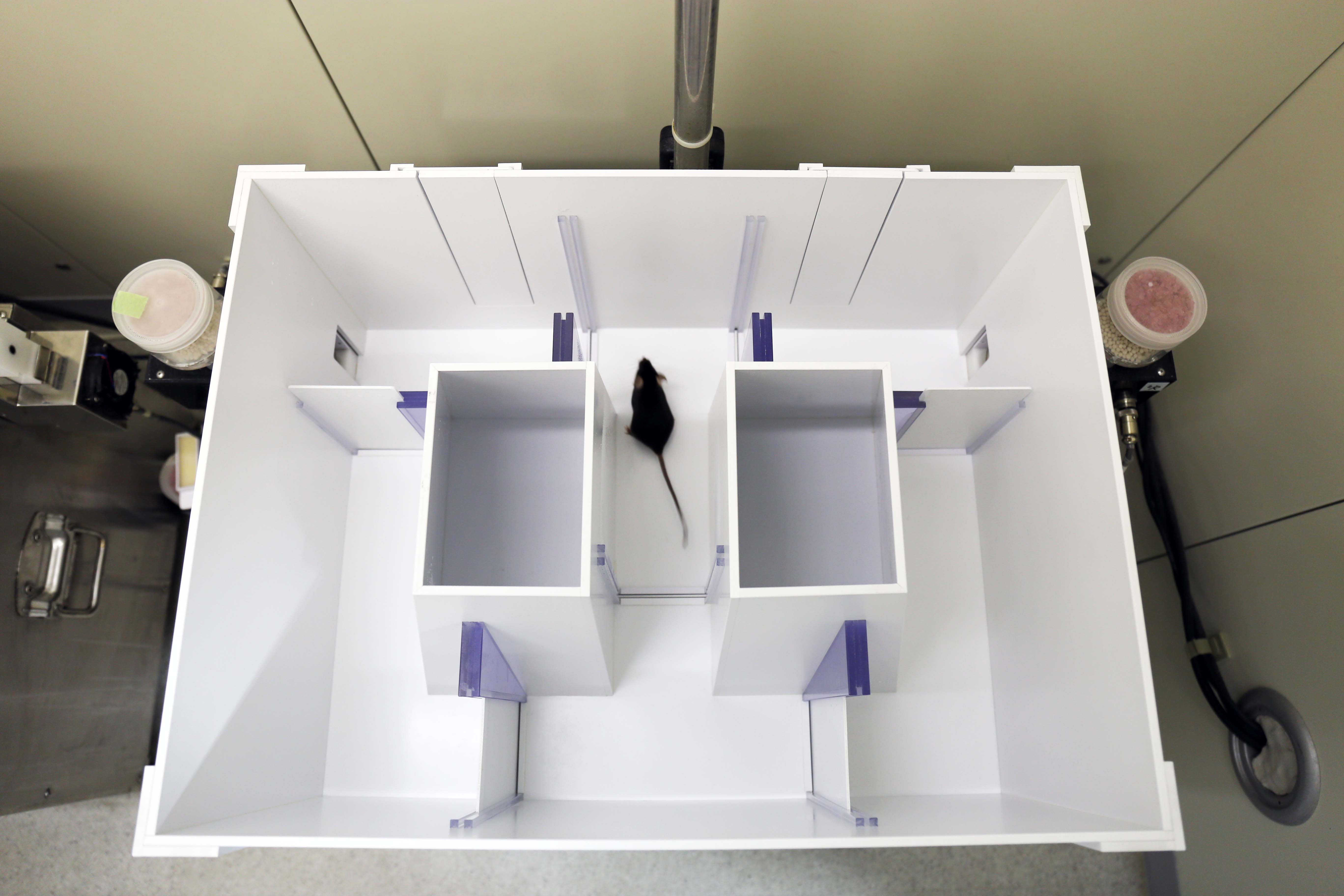 T-Maze Test
The T-maze apparatus consists of runways partitioned off by sliding doors that can automatically open downward, each with a start box, a T-shaped alley, two boxes with automatic pellet dispensers at one side of the box, and two L-shaped alleys. Each L-shaped alley is connected to the start box so that mice can return to the start box, which excludes the effects of experimenter handling on mouse behavior. This apparatus also has an advantage that in vivo microdialysis, in vivo electrophysiology, and optogenetics techniques can be performed during T-maze performance because the doors are designed to go down into the floor. 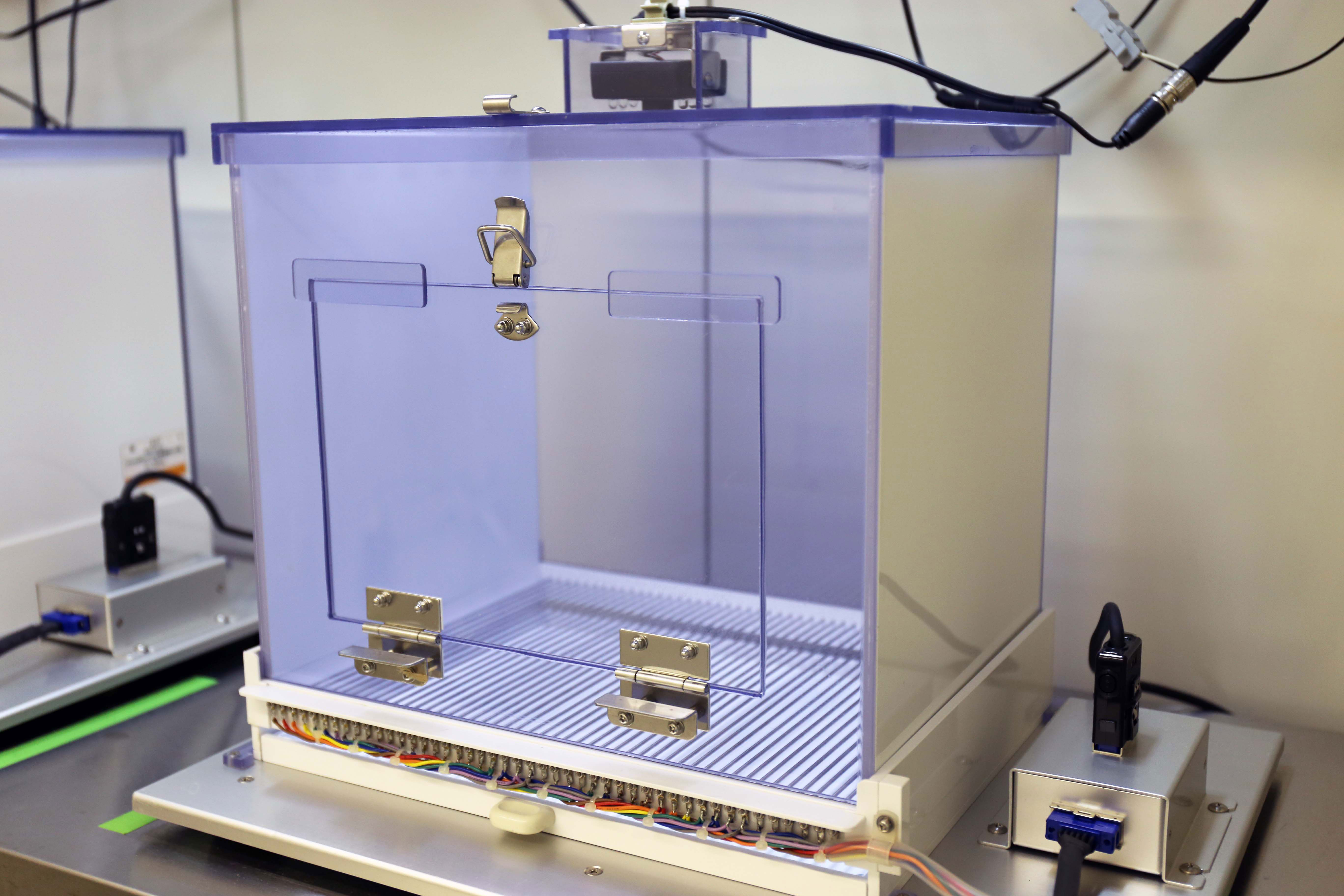 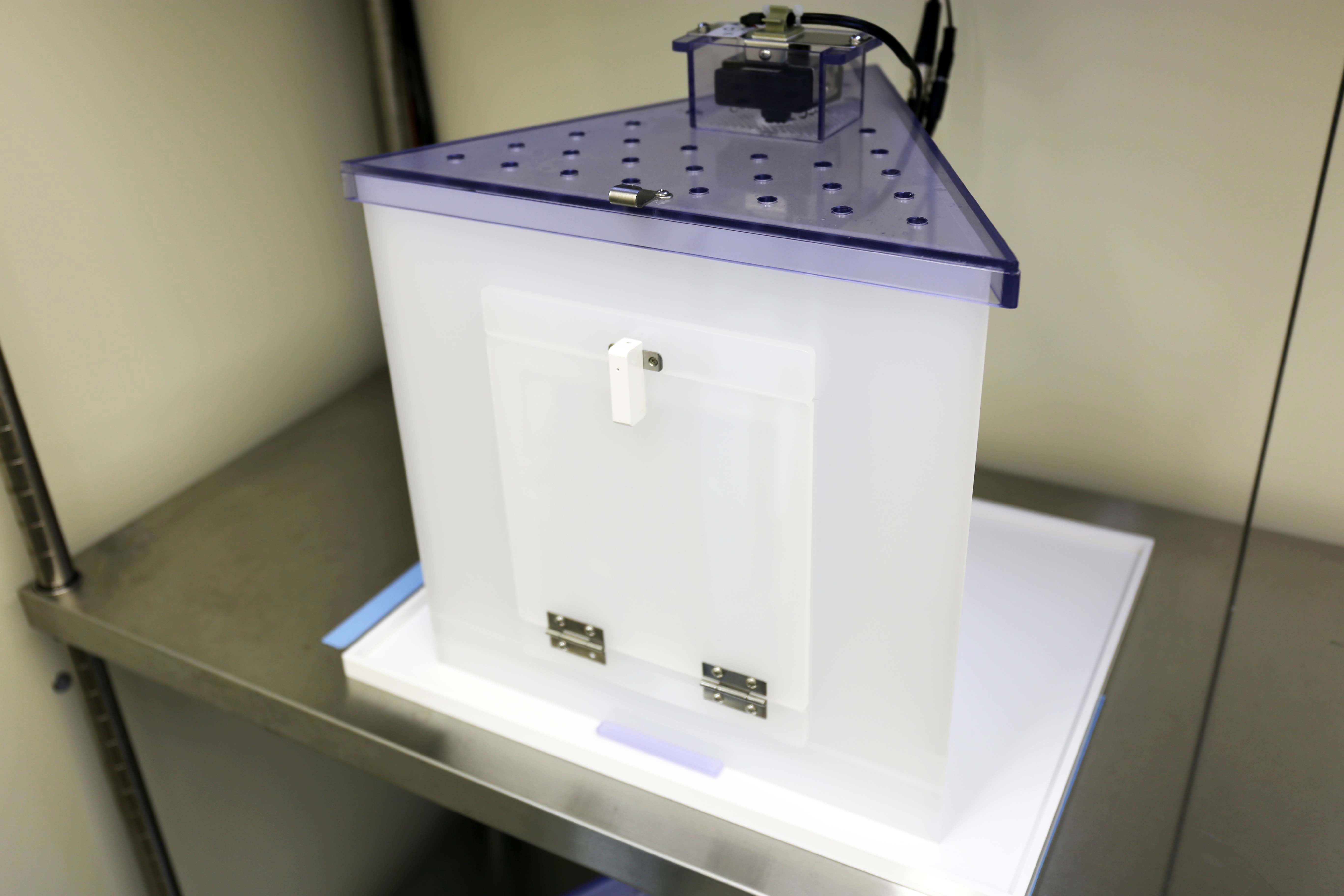 Contextual and Cued Fear Conditioning Test
The contextual and cued fear conditioning test is one of the behavioral tests that assesses the ability of mice to learn and remember an association between environmental cues and aversive experiences. In this test, mice are placed into a conditioning chamber and are given parings of a conditioned stimulus (an auditory cue) and an aversive unconditioned stimulus (an electric footshock). After a delay time, the mice are exposed to the same conditioning chamber and a differently shaped chamber with presentation of the auditory cue. Freezing behavior during the test is measured as an index of fear memory.
Shoji, H., Takao, K., Hattori, S., Miyakawa, T. Contextual and Cued Fear Conditioning Test Using a Video Analyzing System in Mice. J. Vis. Exp. (85), e50871, doi:10.3791/50871 (2014). 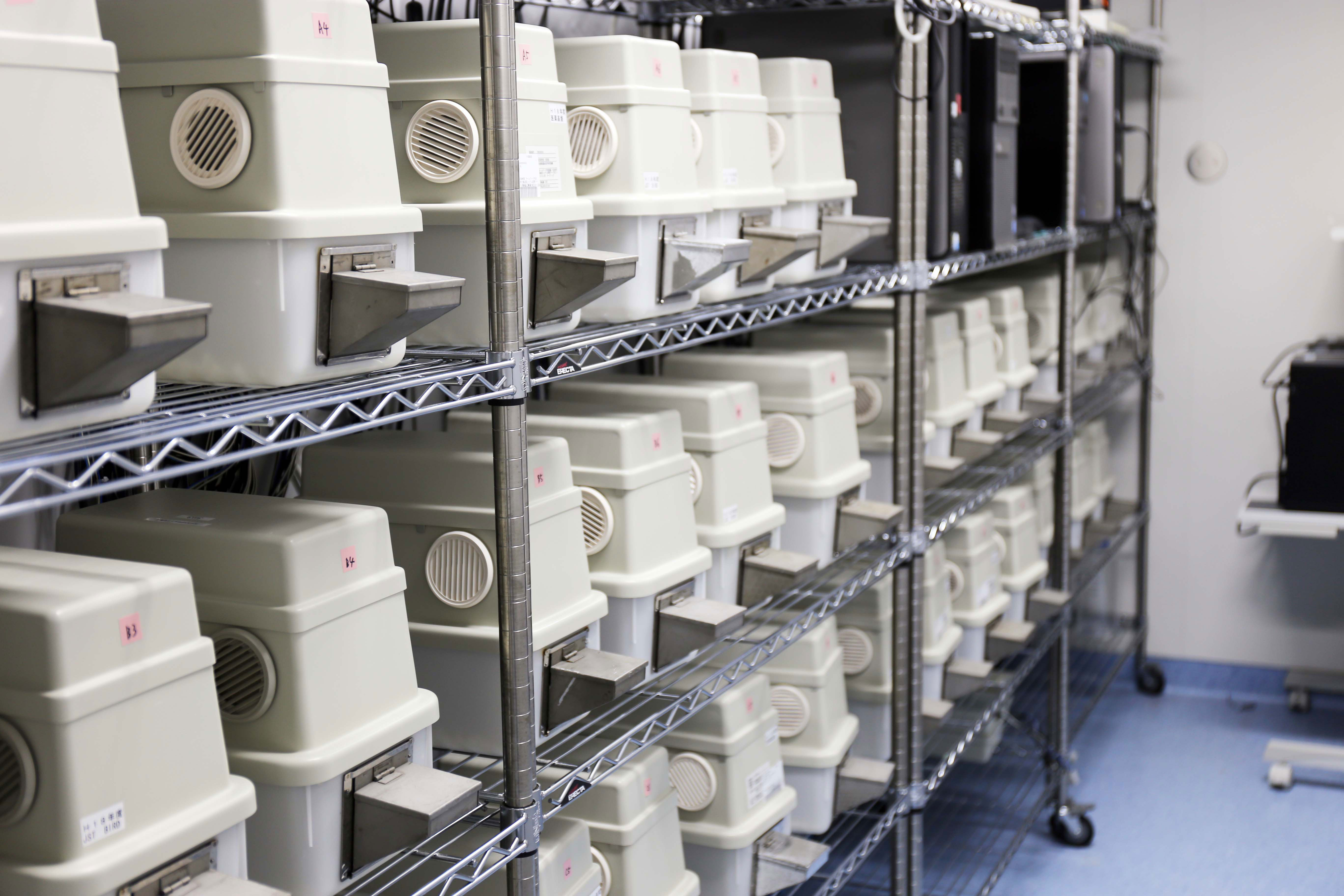 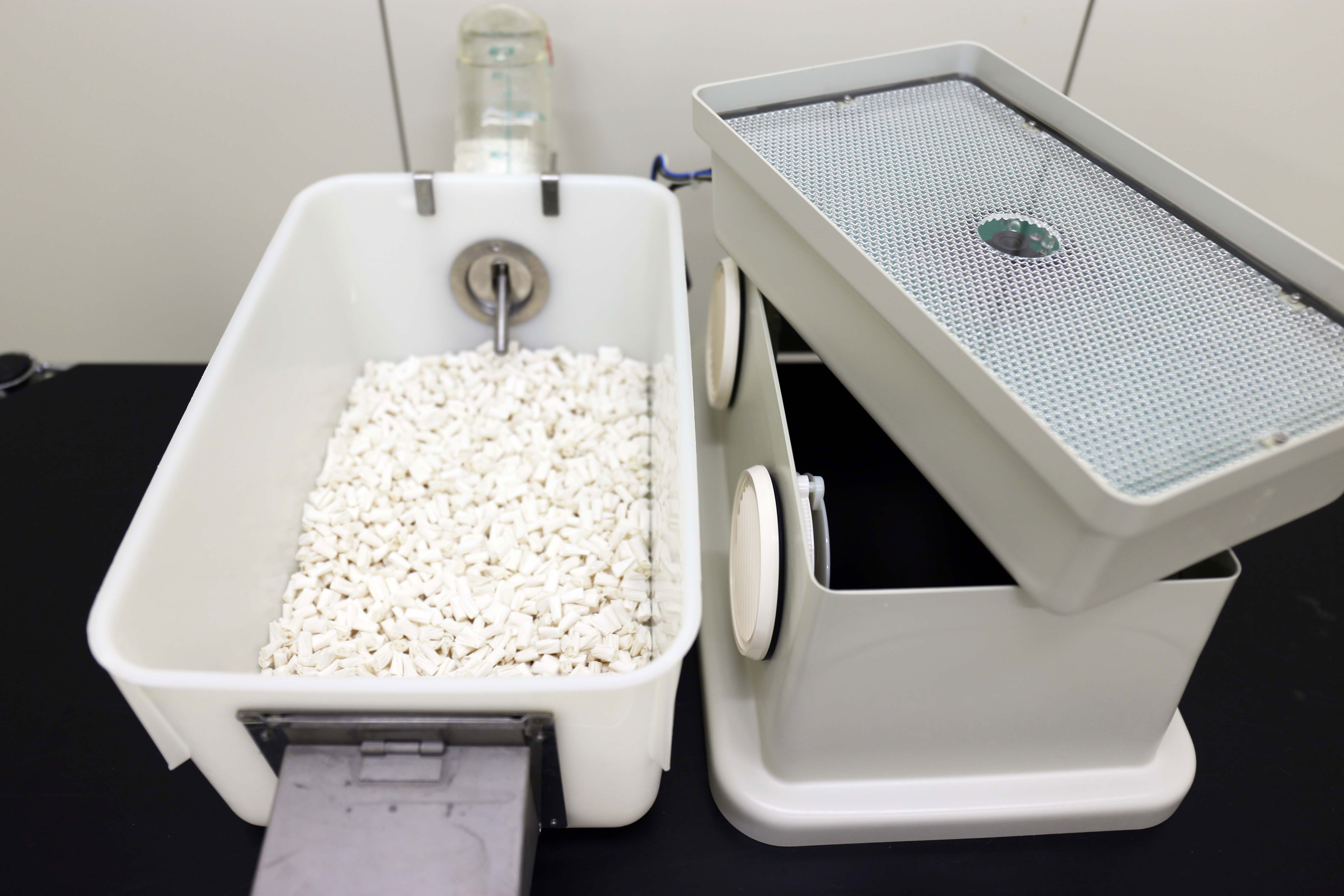 Homecage Test
The system contains a home cage and a filtered cage top, separated by a metal stand containing an infrared video camera that is attached at the top of the stand. Two genetically identical mice that were housed separately are placed together in a home cage. Their social behavior is then monitored. Outputs from the video cameras are fed into a PC. Images from each cage are captured at a rate of one frame per second. Social interaction is measured by counting the number of particles in each frame: two particles indicated the mice are not in contact with each other; and one particle demonstrated contact between the two mice.