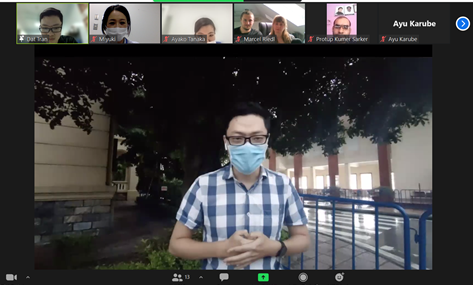 A joint event between the English-Speaking Society (ESS) and the Center for International Relations was held on October 15. The theme was "Virtual Campus Tour." Students from the School of Medicine took the lead in introducing the campus, including a live webcast, to students overseas who have been waiting to come to Japan. The ESS students worked in teams to introduce their favorite dishes in front of the restaurant and walked around the building 3 while live-streaming the event.
The event was greatly enlivened by their lively expressions and fluent English. In the second half, the prospective international students introduced their campus with great videos and photos. The students' smiles in the commemorative photo taken at the end of the event showed how much fun they had at this event. The leader, who planned and hosted the event, was very enthusiastic and said, "I would love to do another event! "The first online event with the ESS students and the prospective international students led them to the next level.