On October 12, 2018, the Welwalk WW-1000 robot, which was jointly developed by Prof. Eiichi Saitoh, Director of the Department of Rehabilitation Medicine I, Fujita Health University School of Medicine and Toyota Motor Corporation, won the 8th Robot Award. 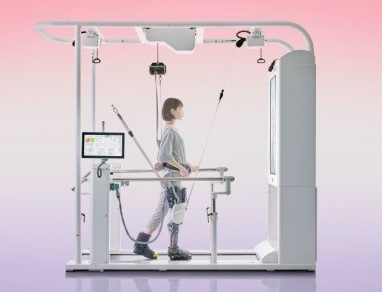 Welwalk WW-1000 is a rehabilitation support robot that supports people with lower-extremity paralysis caused by stroke, etc. In a single-robot system, various functions based on motor learning theory are integrated. Additionally, the robot is equipped with multiple functions, including adjusting training difficulty levels according to each patient’s ability and providing feedback to patients about their condition. Furthermore, the robot is designed to be used with ease in clinics through user-oriented functions and structures such as easy attachment/removal and integrated operations on the control panel.

Rehabilitation research is conducted every day at Fujita Health University to help patients walk independently. Although it is ideal to encourage patients to regain their sense of balance by recurrently moving forward and losing balance, in an effort to enable them to regain walking ability in an earliest possible timeframe, health professionals find it highly challenging to assist patients while taking care to avoid any patient injuries.

The rehabilitation robot Welwalk was developed out of a hope to resolve this issue.
If a patient is on the verge of falling down, Welwalk will skillfully catch the patient with a response time of almost zero seconds. This allows the patient to move forward ambitiously, helping them to drastically regain walking ability.
Fujita will continue its commitment toward providing rehabilitation technologies with robots, which complement human rehabilitation services.

Points to note for assessment in the Health, Labour and Welfare Minister's Award

Welwalk WW-1000 was highly assessed because it was developed on the basis of existing technologies to address several real-world needs and was explicitly designed to offer benefits to the community through its introduction to rehabilitation sites. Moreover, at the time of machine installation, necessary training is provided and best practices are shared, along with installation tasks, enabling progress at a faster pace than initially aimed, as well as a positive business prospect.

The Robot Award recognizes and honors advanced robots, components, software, and the cutting-edge use thereof, as well as research and development and campaigns for talent development to develop robot technology and expand the use of robots. Since its seventh anniversary, based on the Robot Awards Expansion scheme, the following five new awards were added to the Economy, Trade and Industry Minister's Award: the Minister for Internal Affairs and Communications Award; the Minister of Education, Culture, Sports, Science and Technology Award; the Health, Labour and Welfare Minister’s Award; the Agriculture, Forestry and Fisheries Minister’s Award; and the Land, Infrastructure, Transport and Tourism Minister’s Award.