Fujita Health University has launched the "International Center for Cell and Gene Therapy", a research facility with world-class equipment to play a key role in next-generation regenerative medicine research. It is the first and only university facility in Japan that can consistently perform cell culture, processing, and application, and is aiming to start the world first practical usage of personalized cancer immune cell therapy (CAR-T treatment) tailored to each patient and gene therapy. 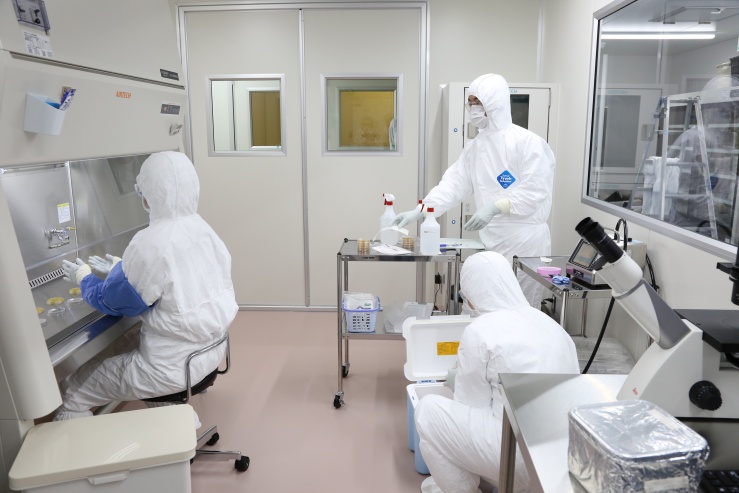 Opening ceremony was held from 10:00 am on May 30, and the chairman of the board of director Kiyotaka Hoshinaga, the center director Professor Akifumi Matsuyama, the President of the National Hospital Organization Nagoya Medical Center’s Emeritus Director and the Emeritus professor of Nagoya University, Hidehiko Saito had greeted. The chairman of the board of director, Hoshinaga said, “It is a facility that meets the strict international standard that no other university in Japan has. Also researchers from overseas will join next year. We would like to advance the research so the medicine developed in this center can be used all over the world. " After the opening ceremony, the inside of the center was disclosed to the media and medical personnel, and they had given a tour with a demonstration of cell culture under strict control.
In the afternoon, lectures were held by the center director Akifumi Matsuyama and the deputy director Hanayuki Okura. Bye explaining the process of establishment and prospects, the director Matsuyama said, “For patients who could not be cured by surgery or medication until now, we would like to provide the proper regenerative medicine by having the wider options such as regenerative medicine and cell medicine." In addition, Deputy Director Okura spoke about the attractiveness of the regenerative medical work along with the challenges in human resource development. In the lecture, around 100 visitors eagerly listened to their speech.

The Only University with All-Exhaust Negative Pressure Room in Japan

Medical Treatment Culturing and Returning the Patient's Own Cells

The pillar of research is the use of somatic stem cells that have the function of regenerating tissues. This is to culture and process the activate somatic stem cells collected from the subcutaneous fat of the patient, and to increase normal cells by returning them to the patient’s body and restore the original function. This could be applied to the treatment of severe cardiac failure and cirrhosis.
Back to the list