Conventional optogenetics involves invasive implantation of optical fibers in target brain tissues. This is especially challenging for deep areas of the brain owing to extensive tissue damage. A group of neuroscientists and material scientists now reveal a novel X-ray and scintillator based-optogenetics technique that allows control of neural function deep in the brain without causing any damage. This study adds another aspect to the long list of uses of X-rays in biology and medicine.

Optogenetics is an elegant technique of controlling neurons in the brain using light. Neurons are loaded with special light-sensitive proteins called opsins that sense light (in the visible range), convert it into electric signals, and activate neurons. Conventionally, optical fibers connected to a light source are invasively implanted into the target tissue. But reaching the deep areas of the brain using this technique is usually accompanied by extensive tissue damage, light toxicity, and harmful effects of thermal irradiation. To reduce this damage, scientists use microparticles that emit visible light in response to near-infrared irradiation (NIR). These particles are injected into the target tissue and neuron activation is achieved without tissue damage. However, NIR has its limitations—it can only penetrate some millimeters of tissue.

Now, researchers from Japan have finally overcome this challenge by using X-rays to penetrate deep regions of the brain. The findings of this multidisciplinary study, all set to be published in Nature Communications, was led by neuroscientists Prof. Takayuki Yamashita and Dr. Takanori Matsubara from the Department of Physiology, Fujita Health University School of Medicine, and material scientist Dr. Takayuki Yanagida from Nara Institute of Science and Technology. Prof. Yamashita explains the use of X-rays in their study: “This new technology enables remote control of brain functions in living animals without damaging radio-sensitive cells in the body.”

X-rays are widely used for imaging the human body because of their penetrative capacity. Using this ability of the X-rays, the researchers could reach the deeper areas of the brain. However, opsins do not respond to X-rays. So, to convert the radiation into visible light, the researchers chose materials called scintillators. Prof. Yamashita explains, “Scintillators, which emit visible light when irradiated with X-rays, have widely been used in X-ray inspection machines and CT scans, but their applications in biology have been limited. This work is the first application of scintillators to behavioral neuroscience.”

The researchers crushed yellow-emitting inorganic scintillator crystals (figure 1) synthesized in the lab and injected the microparticles into mice brain cells. When X-rays were irradiated onto a dissected mouse head, they passed through skin, skull, and brain tissue. In response to the X-rays, the microparticles emitted yellow light which activated the opsins for excitation and inhibition of neurons (figure 2). The researchers were able to confirm these results in live mice.

To explore further, the researchers also tested whether the control of neural function by X-rays and opsins could induce a change in behavior. For this, they performed a conditioned place preference test in which mice were given a choice between two compartments, one out of which was exposed to X-ray radiation (figure 3). The mice either had excitatory opsins or inhibitory opsins in neurons that govern this type of behavior. Before X-ray irradiation, no mice showed any preference for a compartment. However, after X-ray irradiation, mice with excitatory opsins had an increased preference for the X-ray irradiated compartment and mice with inhibitory opsins showed the opposite behavior.

These results show the advantages of X-rays over conventional methods of optogenetics. Prof. Yamashita is excited by the achievement of the team, “There are many biomedical technologies that use light to control protein functions. However, these technologies have not been easy to apply to deep tissues owing to the low penetration of stimulating light into the tissue. In contrast, our technology is almost unconstrained by the depth of the tissue.” It also helps that scintillators are bio-compatible, do not cause any tissue damage, and are non-toxic even for long-term implantation.

Scintillator-based optogenetics has many potential applications, from modulating neurons for research to treatment of neurological disorders. The non-invasive nature of this technique allows experiments to be conducted without wires and plugs, not hindering observation and science. The world of neuroexploration thus seems to have found a new and wonderful probing technique! 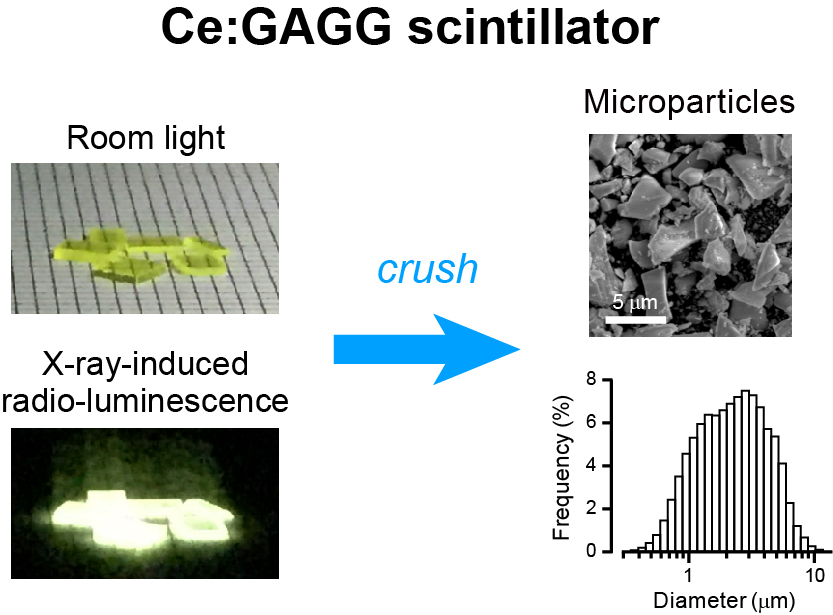 Fig. 1. Ce:GAGG scintillator
Ce:GAGG is a scintillator that emits yellow luminescence when irradiated with X-rays. Researchers crushed crystals into micrometer-sized particles in order to inject them into the brain.
Image credit: Takayuki Yamashita from Fujita Health University

Professor Yamashita is a faculty at the Department of Physiology, Fujita Health University School of Medicine, Japan. He completed his PhD from the University of Tokyo in 2007. He worked as an Assistant Professor at the Research Institute of Environmental Medicine, Nagoya University. He has many research publications and his main research interests are neural circuits and animal behavior.