The interrupted non-coding regions in pre-mRNAs, termed “introns,” are excised by “splicing” to generate mature coding mRNAs that are translated into proteins. As human pre-mRNA introns vary in length, the splicing mechanisms and factors involved are likely not universal. A study by researchers from Fujita Health University in Japan reports a subset of human short introns that are spliced by novel essential splicing factor, SPF45 (RBM17), instead of by a known splicing factor, U2AF dimer.


Protein-coding genes carry the blueprint for protein production. In higher organisms, however, most of the coding-gene transcripts, or pre-mRNAs, are separated by non-coding sequences called “introns,” which must be cut out or “spliced” to make mature mRNA that can be translated into protein.

Human pre-mRNA introns vary extensively in their lengths, ranging from under fifty to over a million nucleotides (nt). Human pre-mRNA splicing involves dynamic stepwise reactions in a huge protein-RNA complex called “spliceosome,” which includes five kinds of small nuclear ribonucleoproteins, called U snRNPs, and many protein factors. The essential splicing signal sequences in pre-mRNA—the 5′ splice site, the branch-site sequence, and the poly-pyrimidine tract (PPT) followed by the 3′ splice site—are bound by the splicing factors U1 snRNP, U2 snRNP, and U2AF65/U2AF35, respectively, which together constitute the spliceosomal A complex. The globular shape of the A complex fully occupies the length of a 79–125 nt single-stranded RNA, which is about two-fold longer than the known short introns (43–56 nt). How are these short introns able to accommodate the oversized complex with the known essential factors? It may be assumed that such short introns are spliced out by alternate mechanisms.

Now, a team of researchers led by Professor Akila Mayeda from the Institute for Comprehensive Medical Science, Fujita Health University, Japan, has attempted to answer this question in their latest study published in Nature Communications. Elaborating their findings, the paper’s co-author Kazuhiro Fukumura says, “The length variation of human pre-mRNA introns is extensive, ranging from fifty to over a million nucleotides. We thus postulate that there is possibly a distinct alternate splicing mechanism involved in splicing of human short introns.”

The strongest splicing repression in HNRNPH1 pre-mRNA with 56-nt intron was caused by knockdown of SPF45, but no splicing repression was observed in pre-mRNA with control 366-nt intron. To further confirm that SPF45 is a common splicing factor for a group of short introns, they performed whole-transcriptome sequencing with RNA prepared from the SPF45-knockdown cells. The most frequent changes of splicing in SPF45-knockdown cells were intron retention, and 187 of the retained introns were identified. Remarkably, the length distribution of these SPF45-dependent introns was strongly biased towards shorter lengths. This suggested that SPF45 is required for the splicing of many pre-mRNAs with short introns.

Previously, SPF45 was reported to function as a regulator of alternative splicing; however, SPF45 is also an essential factor for cell survival and maintenance in vivo. The research team offers a solution to this enigma by demonstrating that SPF45 is a novel and distinct constitutive splicing factor in the early spliceosome, i.e., a subset of human short introns with truncated PPTs is spliced out with SPF45 but not with previously known authentic U2AF heterodimer.

Prof. Mayeda states, “This is a ground-breaking accomplishment in terms of basic research; however, the applications of our findings are also potentially intriguing. Overexpression of SPF45 confers multidrug resistance to anticancer drugs. Presumably, the genes involved in this mechanism harbor SPF45-dependent introns. Thus, overexpression of SPF45 may cause up-regulation of such genes though splicing activation of the transcripts. Understanding these mechanisms can aid in development of effective therapeutic interventions.”

SPF45/RBM17-dependent, but not U2AF dependent,
splicing in a distinct subset of human short introns 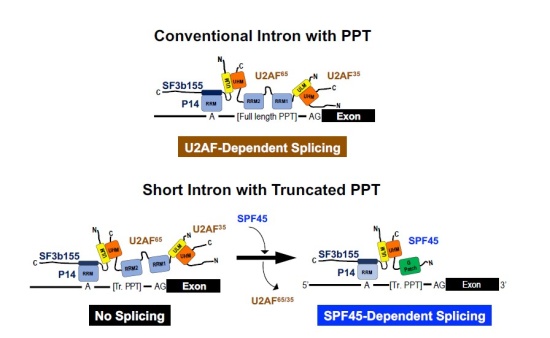 Figure 1. Previously known U2AF-dependent splicing on a conventional intron and novel SPF-45 dependent splicing on a short intron
SPF45 is a novel essential splicing factor acting on a subset of human short introns; the mechanism of splicing involving this factor is distinct from that on longer conventional introns, reveals new study by researchers from Fujita Health University in Japan.
Image credit: Akila Mayeda from Fujita Health University

Dr. Akila Mayeda ran his own lab at the University of Miami School of Medicine from 1998 to 2007. Since 2007, he has been a tenured Professor at the Division of Gene Expression Mechanism, Institute for Comprehensive Medical Science, Fujita Health University. He is one of the pioneers of human pre-mRNA splicing studies, and internationally recognized leader in the field of the mechanism of human gene expression. To date, he has authored 82 publications across these areas in international journals. His research team is currently investigating the mRNA quality control mechanisms in pre-mRNA splicing and the mechanism of aberrant splicing and splicing defects involved in cancer pathologies.