Skin wounds from ischemia-reperfusion injuries—tissue damage caused by blood returning to tissues after a period of oxygen deprivation—may not heal appropriately in some patients, owing to elusive underlying immunological mechanisms. Scientists from Japan have now succeeded in proposing a means to solve this medical conundrum by understanding the role of interleukin-36 receptor antagonists as they act to inhibit the effects of interleukin-36 cytokines, which could help identify new therapeutic targets for wound healing.

Ischemia, which in modern Latin means, “staunching of blood,” is a medical condition in which the blood supply is cut off to different parts of the body. In patients who are bed-ridden, ischemia can manifest as pressure ulcers. Else, it could be the Raynaud’s phenomenon in someone under severe stress. This condition can be rescued by blood reperfusion to the affected areas. However, the latter carries the risk of injuries known medically as ischemia-reperfusion (I/R) injuries.

Skin-based I/R injuries can be exacerbated by inherited immunological mechanisms, for instance in patients who are otherwise showing signs of slow wound healing. To understand the immunological mechanisms underlying the development of this condition better, scientists from Japan, building on previous studies, decided to narrow down their investigation to interleukin-36 receptor antagonist (IL-36Ra), a protein that plays a pivotal immunomodulatory role in wound healing.

Speaking about the motivation behind their research, Mr. Yoshihito Tanaka from Fujita Health University School of Medicine, Japan, who led the team of scientists in the investigation, explains, “We wanted to understand the immunological mechanisms involved in the healing of wounds from cutaneous ischemia-reperfusion injuries, such as pressure ulcers and Raynaud's phenomenon, to narrow down possible therapeutic targets. Drawing from experience, IL-36Ra appeared to be a promising candidate for kickstarting our investigation.”

Accordingly, Mr. Tanaka worked with his team to understand how deficiency of IL-36Ra affects wound healing in cutaneous I/R injuries. For this, the scientists used mice knocked out for the receptor. Also, they induced cutaneous I/R injuries in knockout and wildtype control mice. Subsequently, they studied corresponding immunological responses in both groups of animals, including the time required for wound healing, infiltration of neutrophils/macrophages (key immune cells) to the site of the wounds, apoptotic skin cells, and activation of other unwanted immunological defense mechanisms. Their findings have been published as a research article in the Journal of The European Academy of Dermatology and Venereology.

The team, comprising Dr. Kazumitsu Sugiura and Dr. Yohei Iwata from Fujita Health University School of Medicine, among others, was able to pinpoint important results. The scientists found that the absence of IL-36Ra, indeed, significantly slows down wound healing in cutaneous I/R injuries, through increased apoptosis, or ‘suicide’ of useful skins cells, excessive recruitment of inflammatory cells, and employment of unnecessary proinflammatory mechanisms. Additionally, they demonstrated the role of Cl-amidine, a protein-arginine deiminase inhibitor as effective in normalizing exacerbated I/R injury in IL-36Ra mice. Based on these observations, the scientists assert their findings are the first conclusive report of the involvement of IL-36Ra in cutaneous I/R injury.

The scientists are positive that they have identified a stalwart therapeutic candidate against cutaneous I/R injuries in IL-36Ra. As Mr. Tanaka optimistically adds, “Our research may lead to the development of therapeutic agents for wound healing of various other refractory skin diseases too.”

The quest for novel therapeutic targets in skin wound healing might just have been empowered by these findings of the team and the future indeed looks brighter for alleviating the painful burden of cutaneous I/R injuries. 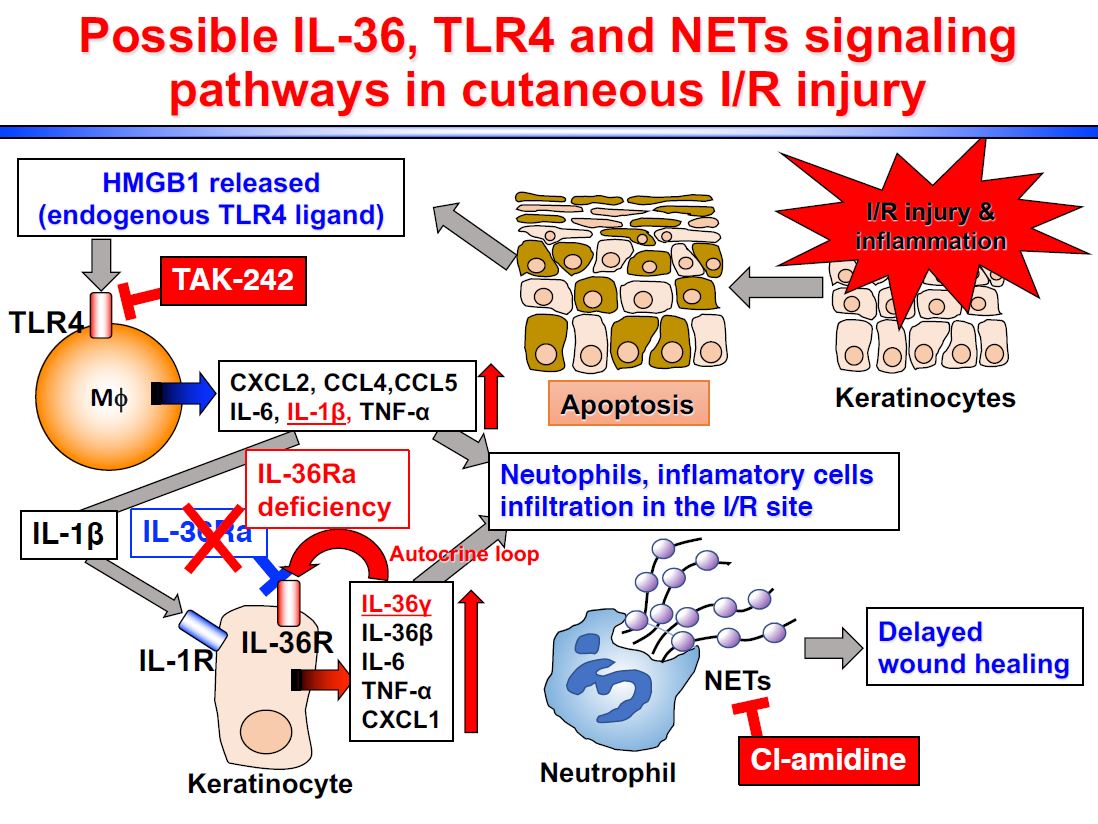 Journal of The European Academy of Dermatology and Venereology

Mr. Yoshihito Tanaka is a graduate student at the Department of Dermatology of Fujita Health University School of Medicine. Mr. Tanaka extensively studies the immunological mechanisms behind dermatological conditions, specifically with animal models. He has over 11 publications to his credit, in reputed international journals, with over 16 citations.