RNA-binding proteins perform multiple functions in cells, but how their pleiotropic functions are determined remains largely unknown. A research team led by Professor Kunihiro Tsuchida from Fujita Health University, Japan has discovered the pleiotropic role of heterogeneous nuclear ribonucleoprotein K (hnRNPK) in skeletal muscle cell differentiation that is both lncRNA Myoparr-dependent and -independent. Findings suggest that targeting hnRNPK to regulate multiple genes involved in disease pathologies could be a new therapeutic strategy for neuromuscular diseases.


RBPs (RNA-binding proteins) are a diverse category of proteins that are required for a wide range of cell activities. It's worth noting that they perform their molecular functions in tandem with long non-coding RNAs (lncRNAs), particularly when it comes to rewiring transcription. RBPs are therefore crucial for the function of lncRNAs. Although many of these functions have been identified in the literature, it is unclear how a single RBP regulates “pleiotropic” functions, i.e., multiple functions from the same gene.

The lncRNA “Myoparr” is known to play a critical role in regulating the proliferation and differentiation of skeletal muscle cells, known as “myoblasts” according to a prior study. Furthermore, the previous study proposed that the heterogeneous nuclear ribonucleoprotein K (hnRNPK) could bind to Myoparr and regulate these actions in an RNA-protein consort. However, because the exact role of hnRNPK in muscle cells was unknown, this was just a speculation.

To address this knowledge gap, the same research team has now proven that hnRNPK has multiple functions that are both Myoparr-dependent and independent. Prof. Kunihiro Tsuchida of Fujita Health University—together with co-authors, Asst. Prof. Keisuke Hitachi and colleagues—guided the study published in the International Journal of Molecular Sciences. They observed that via binding to Myoparr, hnRNPK inhibits myoblast differentiation and decreases the expression of myogenin, a crucial regulator of skeletal muscle development. Because RBPs may be implicated in a variety of human disorders, including neuromuscular disorders, targeting hnRNPK as a multifunctional RBP could be important for developing effective therapeutics. “The analysis of RNA-binding proteins bound to lncRNAs will be useful for elucidating both the physiological functions of lncRNAs and the complex functions of RNA-binding proteins in cell differentiation,” says Asst. Prof. Hitachi.

The authors first established the association of hnRNPK and Myoparr using RNA immunoprecipitation and immunoblotting assays and then investigated its role in the mouse myoblast cell line C2C12. They found that differentiated cells had increased myogenin levels, but hnRNPK levels were lower. They next produced a knock-down cell called “hnRNPK KD,” where they observed even higher levels of myogenin, showing a negative regulation. The researchers were curious as to how this regulation occurred during transcription. It was evident that the specificity of RNA-protein binding was key in this process. They then discovered a small stretch of Myoparr sequence (rich in ccawmcc motifs) that was essential for hnRNPK binding, which in turn regulated myogenin expression.

What they found most remarkable was that knocking down hnRNPK during the early phases of differentiation increased the expression of Myod, a protein required for the development of skeletal muscle tissue. In their immunocytochemistry investigations, this resulted in defective myotube production. "Our findings suggest that hnRNPK is essential for normal myotube development, presumably as a result of its inhibitory influence on myoblast pre-mature differentiation," says Prof. Tsuchida.

They discovered that when hnRNPK and Myoparr levels were knocked down in cells, a common subset of genes, including myogenin, was highly up-regulated by hnRNPK KD but greatly down-regulated by Myoparr KD. Interestingly, there was also a gene cluster that was unique to hnRNPK KD and was not impacted by Myoparr KD. Among these, hnRNPK suppressed genes coding for aminoacyl-tRNA synthetase, mostly the cytosolic ones. According to Asst. Prof. Hitachi, "We focused on endoplasmic reticulum stress to uncover the molecular mechanism behind this suppression and discovered that it was mediated via the eIF2/Atf4 pathway, which is independent of Myoparr."

The findings clearly indicate that hnRNPK has numerous inhibitory activities in skeletal muscle cell differentiation, indicating that it has pleiotropic functions. Prof. Tsuchida explains, "The myotube abnormalities suggest that hnRNPK may be involved in the fine-tuning of muscle cell development in both Myoparr-associated and Myoparr-independent ways."

The researchers are excited about the future applications of their research, especially because downstream genes of hnRNPK are significantly linked to neuromuscular and other illnesses in humans. "Our study suggests that targeting hnRNPK to modulate these genes could be a potential therapeutic strategy for treating human disorders," he concludes. 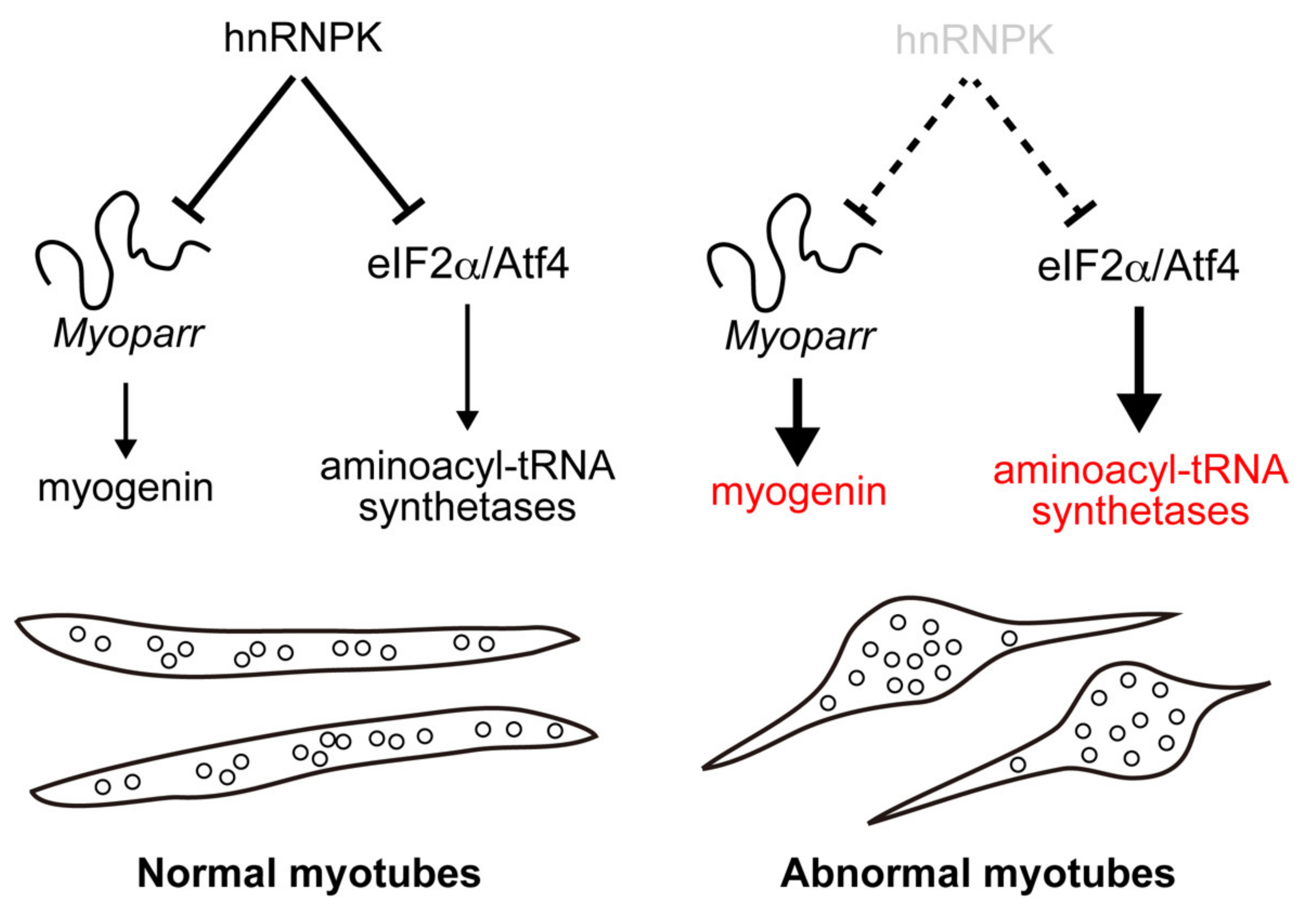 Dr. Keisuke Hitachi is an Assistant Professor at the Institute for Comprehensive Medical Science, Fujita Health University, Japan. His research focuses on employing model animals, differentiation culture, and molecular biology to create solutions for intractable neurological illnesses. He has over 40 publications in renowned journals with over 900 citations.

Dr. Kunihiro Tsuchida is a Professor at the Institute of Comprehensive Medical Science, Fujita Health University, Japan. He researches the pathophysiology and development of therapies against neuromuscular disorders through nanomedicine, cutting-edge lncRNA analyses, exosome research, and cytokine signaling pathways. He has over 160 publications in renowned journals with over 11,000 citations.