Acetylcholine (ACh) is a neuromodulator with a central role in aversive learning—rapid conditioning to unpleasant smell, taste, or touch. These learning functions play out in cells called D2 receptor-expressing medium spiny neurons (D2R-MSNs) that are located in the striatum/nucleus accumbens (NAc) of the brain. ACh levels increase in the NAc during aversive learning experiences. Previous studies have shown that ACh acts on D2R-MSNs through a receptor called muscarinic receptor M1 (M1R), which in turn activates the downstream signaling molecule called protein kinase C (PKC). However, thus far, the exact intracellular signaling mechanism through which ACh influences aversive learning has been unclear, which has limited the development of AD therapeutic strategies that directly target ACh intracellular signaling.

Recently, in a new study published in Molecular Psychiatry, researchers from the Prof. Kozo Kaibuchi laboratory at Fujita Health University (FHU), have elucidated the molecular mechanisms of ACh for learning and memory. “This is the first time this has been achieved in the 45 years since the cholinergic hypothesis of AD was established. Our study also led us to understand the intracellular mechanism of donepezil and its effect on learning and memory. This exciting discovery opens doors to new therapeutic strategies for AD,” explains Assistant Prof. Yukie Yamahashi, a lead author of the study.

Molecular signaling cascades are facilitated by a process called phosphorylation, which involves the addition of phosphate groups to certain substrate molecules by kinases within cells. To study phosphorylation, the research team employed a technique called kinase-oriented phosphoproteomic analysis, which was developed by Prof. Kozo Kaibuchi, the corresponding author of the study.

The research team confirmed the role of ACh in stimulating PKC after monitoring phosphorylation events following ACh binding to M1Rs in mice striatal/NAc slices ex vivo. Subsequently, the phosphoproteomic anaylsis was peformed, which yielded 116 PKC substrate candidates, including ‘β-PIX,’ the activator of a protein called ‘small GTPase Rac.’ “We discovered that PKC phosphorylated and activated β-PIX downstream of ACh, which in turn activated a kinase called PAK, a downstream target of Rac. We then examined the involvement of the identified ACh-M1R-PKC-Rac-β-PIX-PAK cascade in aversive learning and aversion memory by using passive avoidance tests in mice,” says Dr. Yamahashi. Finally, the researchers also found that donepezil activates the cascade to enhance aversive learning. “This study constitutes the first evidence for the intracellular mechanisms of donepezil that regulate learning and memory,” says Dr. Yamahashi.

Their findings tie in well with a recent study from Prof. Kaibuchi’s lab published in the Journal of Neurochemistry. The first author of the study, Dr. Md. Omar Faruk, has been awarded the Mark A. Smith Prize from the International Society for Neurochemistry (ISN). The study showed the involvement of the ‘voltage-gated potassium channel KCNQ2’—which was identified as another PKC substrate candidate in the above phosphoproteomic analysis—in aversive learning. In fact, PKC directly phosphorylates KCNQ2 at threonine 217, the phosphorylation site previously reported for possible involvement of modulating its channel activity. Furthermore, the administration of donepezil also enhanced the phosphorylation event in the NAc.

The team’s findings directly imply that the signal cascade, M1R-PKC-β-PIX-PAK, is involved in recognition memory and associative learning. This is very significant as the cascade itself offers a platform for screening AD drugs undergoing development. “While we only focused on β-PIX and elucidating the M1R-PKC-PAK pathway, our phosphoproteomic data revealed many other PKC substrates—presynaptic proteins and postsynaptic scaffold proteins to name a few, which are registered in a database called Kinase-Associated Neural PHOspho-Signaling (KANPHOS) (https://kanphos.neuroinf.jp/). We are only seeing the tip of the iceberg and believe future research could yield novel mechanisms of signal transduction in other brain areas,” says Dr. Yamahashi, regarding the future prospects of their research.

These findings are sure to be glad tidings for patients with AD and their loved ones, and provide hope for the development of new treatments that can improve learning and memory function. 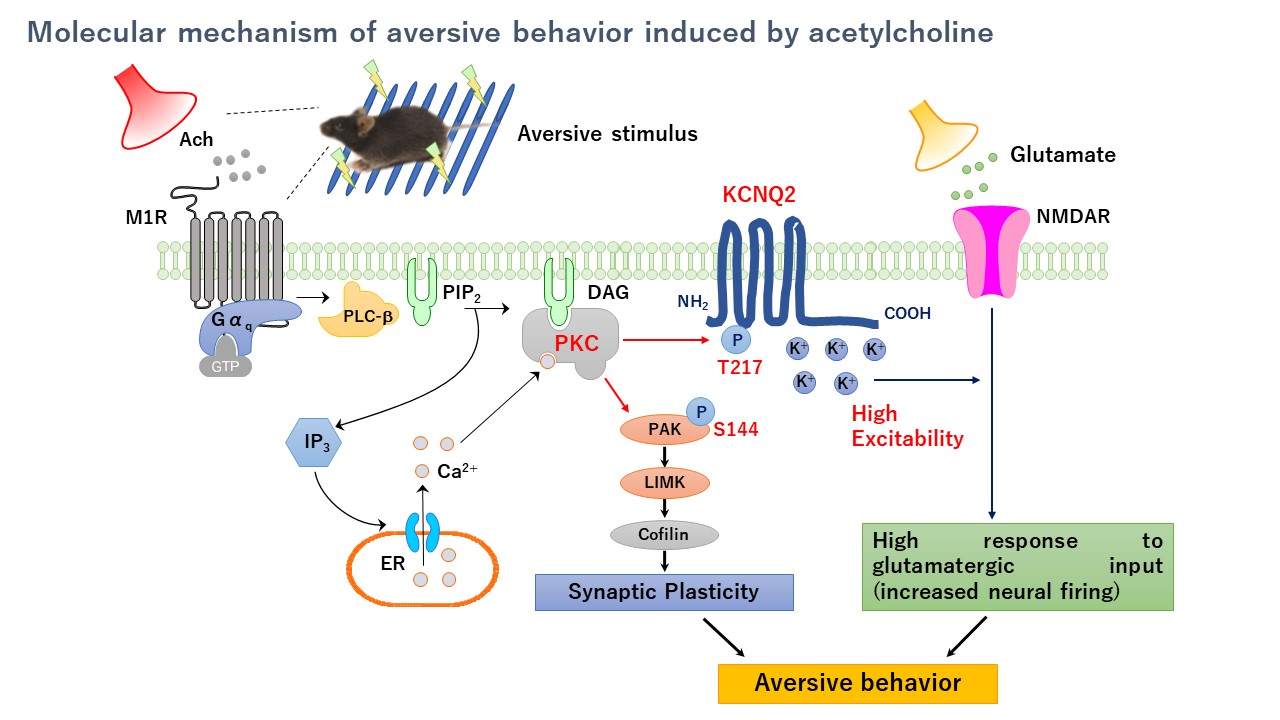 Dr. Yukie Yamahashi is an Assistant Professor at Fujita Health University, Division of Cell Biology. Her research focuses on the mechanisms of intracellular acetylcholine signaling in the brain. She has published 10 peer-reviewed articles in high-impact journals including Oncogene, Cells, and Journal of Neurochemistry, since 2007. She is presently investigating the molecular basis of disorders of the central nervous system, including Alzheimer’s disease, with the goal of developing better therapeutic strategies.

Dr. Kozo Kaibuchi is a Professor at Fujita Health University in the Division of Cell Biology. He earned his MD/PhD in 1984 from Kobe University and his research highlights include a novel phosphoproteomic screen for protein kinase substrates and constructing the KANPHOS database. He moved to Fujita Health University in 2021, where he is focusing on the molecular mechanisms underlying higher brain functions. He has published over 450 peer-reviewed articles and is the recipient of multiple awards including the Tokizane Memorial Award (2009), Ebashi Memorial Award (2015) and Medal with Purple Ribbon (2017).