Contact hypersensitivity is a commonly occurring skin disorder whose mechanisms have largely remained unknown. Now, researchers from Japan’s Fujita Health University School of Medicine have identified the precise physiological mechanisms that trigger its onset, including the prominent role of neutrophil extracellular traps in this process. Their findings may lead to the identification of a physiological drug target that could be crucial for treating contact dermatitis and other related diseases.

Contact hypersensitivity (CHS), commonly known as contact dermatitis, is an itchy rash that develops when certain substances come in direct contact with the skin. Usually, it is the result of an allergic reaction and can make patients feel uncomfortable. Common substances such as perfumes, household chemicals, and accessories can trigger itchy rashes from contact dermatitis. Although common, the underlying physiological mechanisms that trigger CHS remain elusive.

Recently, a research team from Fujita Health University School of Medicine, Japan, has been able to shed light on the precise molecular mechanisms that trigger CHS. The group had previously shown that genetic mutations in the interleukin (IL)36RN gene, which is responsible for the synthesis of the protein interleukin-36 receptor antagonist (or IL-36Ra), may result in enhanced CHS. They also observed that the mutations led to the increased formation of neutrophil extracellular traps (NETs), which are mesh-like structures of DNA and proteins released by neutrophils to capture pathogens. However, the immunological pathophysiology of NETs in CHS remained unclear.

On two previous occasions, the research team successfully established links between IL-36Ra and psoriatic lesions as well as between IL-36Ra and wound healing. The same team has now been able to dive in deep to further explore the underlying mechanisms. Their study was recently published in Scientific Reports (published on Aug 4, 2022) and shows that NETs could be a potential therapeutic target for CHS. The lead author, Dr. Yurie Hasegawa, a graduate student at the Fujita Health University School of Medicine, along with co-authors Dr. Yohei Iwata and Prof. Kazumitsu Sugiura, together demonstrated that NETs play a prominent role in the CHS response in the presence of a high number of inflammatory cells like CD4+ and CD8+ T-cells. “NETs may also exacerbate immune reactions in CHS. Therefore, the inhibition of NET formation may be a new therapeutic strategy in contact dermatitis,” explains Dr. Hasegawa about the rationale of their study.

To test their hypothesis, the team evaluated NET formation in Il36rn-/- mutant mice as well as wild-type mice under the influence of CHS-responsive CD4+ and CD8+ T cells. They first tested the effects of Cl-amidine on the CHS response in the mutant and wild-type mice and found that the number of infiltrating inflammatory cells and area of NETs decreased in both mice types.

Histopathology and cell assays confirmed that the mutant mice had considerably more macrophages and CD4+ and CD8+ T cells than the wild-type mice. Moreover, they demonstrated elevated levels of inflammatory cytokines like IL-1, CXCL1, CXCL2, IL-17A, tumor necrosis factor-α, and IL-36. Interestingly, there were striking differences in IFN-γ and CXCL1 levels between Cl-amidine-treated mutant mice and untreated wild-type mice, but not in the levels of inflammatory cytokines.

They next used the immunofluorescence staining to show that the mutant mice had more NETs in their ear tissues than the wild-type mice. However, treating mice with Cl-amidine—an inhibitor that suppresses the formation of NETs—resulted in a decreased CHS response, suggesting that NETs could be a potential therapeutic target for CHS.

Thrilled by their findings, the team is looking forward to further exploring the connections between NET formation and CHS treatment. Dr. Hasegawa explains, “Our study is the first to suggest the involvement of NETs in the immune responses in CHS. All our findings collectively indicate that the blockade of NET formation by Cl-amidine may be a potential treatment approach for allergic contact dermatitis”.

Let’s hope that their discovery facilitates the development of novel therapeutics for the safe and effective treatment of contact dermatitis. 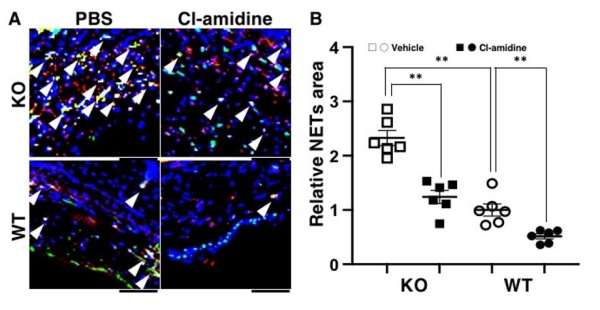 Dr. Yurie Hasegawa is currently pursuing her graduate studies at Fujita Health University School of Medicine’s Department of Dermatology. Her research primarily focuses on interleukins—cytokine proteins that play an important role in the activation, differentiation, proliferation, maturation, migration, and adhesion of immune cells. Dr. Hasegawa has published her cutting-edge research on Interleukin-36 (IL-36) receptor antagonists in the prestigious journal Scientific Reports on at least three different occasions so far.