The nucleus accumbens, part of the basal ganglia in the brain, is composed of neurons controlled by glutamate and dopamine. Dopamine regulates memory and learning, motor functions, and emotional behavior for motivation and reward. Researchers from Japan have now discovered that dopamine increases neuronal excitability via the phosphorylation of a voltage-gated potassium channel subfamily member (KCNQ2), promoting reward behavior in mice. Thus, KCNQ2 is a potential therapeutic target for the treatment of several psychiatric disorders.

One part of the basal ganglia, known as the nucleus accumbens (NAc), is composed of medium spiny neurons (MSNs). The MSNs, in which the dopamine D1 receptor (D1R) and dopamine D2 receptor (D2R) express, are controlled by neurotransmitters—glutamate and dopamine.
Dopamine is an organic chemical that regulates memory and learning, motor functions, and emotional behavior for motivation and reward. On increasing the excitability of D1R-MSNs, dopamine promotes glutamate-induced responses, leading to a reward behavior, i.e., feelings of accomplishment and pleasure associated with completion of certain tasks.

It is known that the molecular mechanism underlying this reward behavior involves a signaling cascade that increases the "phosphorylation" (the attachment of a phosphate group) of protein kinase A (PKA) substrates. Subsequently, the extracellular signal-regulated kinase (ERK), such as a downstream effector of PKA, modulates the excitability of D1R MSNs and in turn, the reward behavior.

Recently, a team of researchers, including Assistant Professor Daisuke Tsuboi and Professor Kozo Kaibuchi of the Fujita Health University, and Dr. Nambu Atsushi and Dr. Hiromi Sano of the National Institute of Physiological Sciences in Japan, identified an ERK phospsho-substrate known as potassium voltage-gated channel subfamily Q member 2 (KCNQ2). Although certain studies have highlighted the role of KCNQ2 channels in MSN excitability, the details of the mechanism are still unclear.

Now, Dr. Tsuboi and his team have investigated the mechanism through which ERK regulates KCNQ2 activity and affects dopamine signaling. “Dysfunctional dopamine signaling is implicated in several neuropsychological disorders, including Parkinson’s disease, drug addiction, and schizophrenia. Therefore, understanding the underlying pathway is crucial for treating several psychiatric diseases,” Dr. Tsuboi remarks while discussing the motivation behind the study, which was published in Volume 40, Issue 10 of Cell Reports on September 6, 2022.

The team conducted experiments and mice and observed that the activation of D1R receptors with an agonist inhibited KCNQ-dependent currents and led to increased D1R-MSN firing rates in NAc slices of mice brains. Interestingly, MSN firing was halted on inhibiting ERK, suggesting its involvement in the process. Further analyses confirmed that the direct phosphorylation of KCNQ2 by ERK occurs through the activation of the dopamine signaling pathway in the NAc of mice.

Next, the team noted that ERK-mediated phosphorylation of KCNQ2 decreased its channel activity. Moreover, the conditional deletion of the Kcnq2 gene in the D1R-MSNs of mice reduced the inhibitory effect of dopamine on the KCNQ current, enhancing neuronal excitability and reward behavior. These effects were rescued when the Kcnq2 gene was re-introduced, but not when its phospho-deficient mutant gene was introduced. This implies that dopamine signaling negatively regulates the currents via KNCQ phosphorylation.

Based on these findings, the team proposed the following mechanism: Dopamine acts on D1R-MSNs to activate the ERK pathway that induces the phosphorylation of KCNQ2. This decreases the channel activity of KCNQ, which increases cell excitability and promotes reward behavior in the presence of glutamate.

So, what are the long-term applications of these findings? Dr. Kaibuchi explains, “Mood disorders such as depression show signs associated with dysfunction of the reward system circuits in the brain. Hence, drugs modulating the dopamine-KCNQ2 pathway can be potential therapeutic targets for drug addiction and mood disorders. This study has highlighted KCNQ2 as a potential target for such psychiatric diseases.”

Here’s hoping that these findings improve our understanding of the dopamine signaling pathway and its association with diverse emotional states! 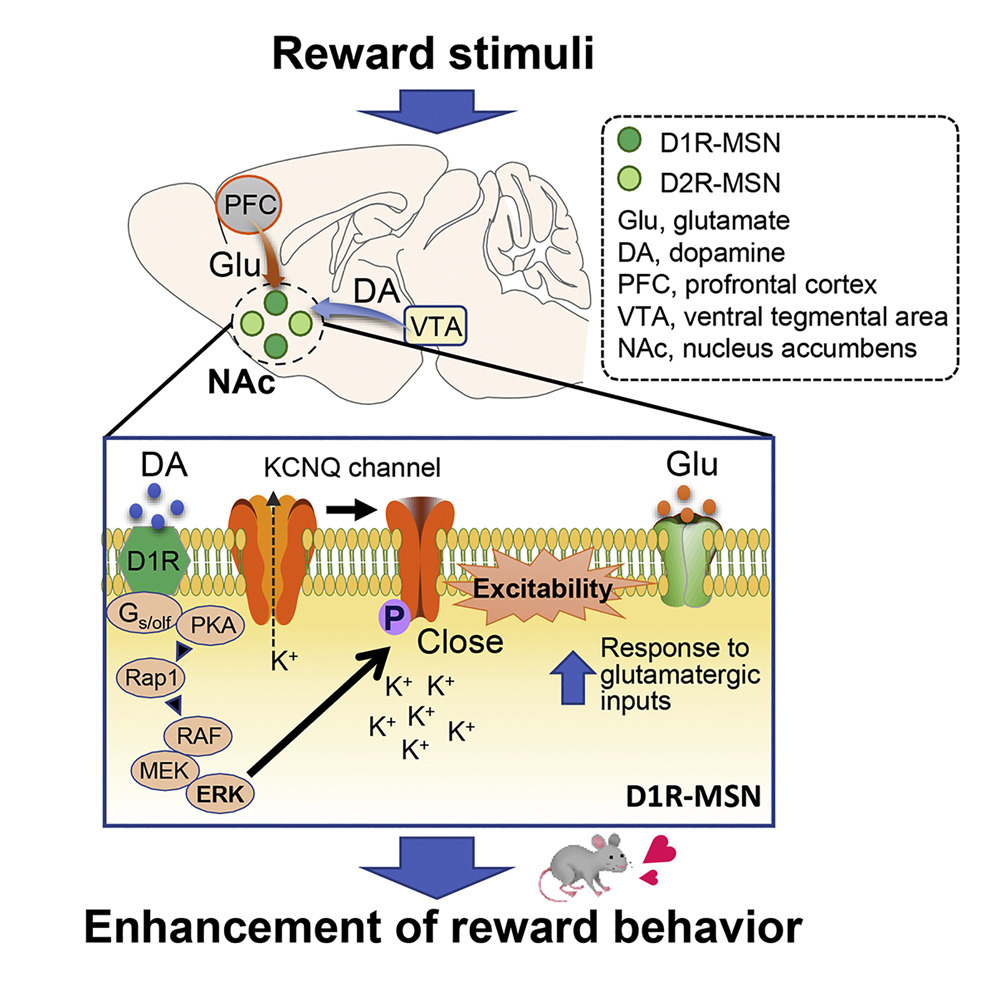 Dr. Kozo Kaibuchi is a professor at the Division of Cell Biology, International Center for Brain Science, Fujita Health University, Japan. He completed his PhD from the Kobe University School of Medicine. He has actively contributed to the field of Neuroscience for more than 40 years. He was awarded the Ebashi Memorial Award by the Japanese Society of Pharmacology in 2015 and the Medal of Honor with Purple Ribbon in 2017. He was appointed the Director of the Institute for Comprehensive Medical Science in April 2021. His research has been cited more than 50000 times, and he has worked with 163 co-authors and published multiple papers during the last 20 years.

Dr. Daisuke Tsuboi is an assistant professor at the Division of Cell Biology, International Center for Brain Science, Fujita Health University, Japan. His areas of expertise include schizophrenia, kinesin, phosphorylation, phosphotransferases, axons, proteins, and neurons. He is currently working on a research project to evaluate the molecular basis underlying dysregulated emotions in the patients with psychiatric disorders.