Researchers identify genetic links between muscle atrophy and two types of myosin, paving the way for a new disease model for scientific and medical research

Muscles are made up of proteins. Myosin, a fibrous protein, serves as a molecular motor and converts the chemical energy stored inside our body into mechanical energy. The synergistic association between the muscle proteins myosin and actin gives rise to skeletal muscle contraction and relaxation, thus allowing the body to move. Therefore, a decrease in muscle mass, i.e., skeletal muscle atrophy, results in reduced motor function.

The skeletal muscle myosin heavy chain or “MyHC” is a fundamental component of the sarcomere—the basic contractile unit of a muscle fiber. The corresponding proteins “MyHC-IIx” and “MyHC-IIb,” are encoded by the genes Myh1 and Myh4, respectively. Using mice that were simultaneously deficient for MyHC-IIx and MyHC-IIb, the research team delineated—for the first time—the role of MyHC-IIx and MyHC-IIb in skeletal muscle atrophy.

“MyHC-IIx and MyHC-IIb are abundant in fast muscles and produce abundant instantaneous power. MyHC-IIb is barely detectable in human skeletal muscles. We produced genetically modified mice with the simultaneous loss of MyHC-IIx and MyHC-IIb by introducing nonsense frameshift mutations into the Myh1 and Myh4 genes, mimicking the loss of MYH1 in human skeletal muscle. Mice deficient in these two types of MyHCs showed very severe muscle atrophy symptoms and died within the first four weeks of life,” says Dr. Keisuke Hitachi of Fujita Health University, who planned the overall experimental design.

The researchers made a series of key observations during their detailed double knockout (dKO; knockout of both MyHC-IIx and MyHC-IIb) analyses. For instance, they recorded a drastic reduction in skeletal muscle mass in the dKO mice at the weaning phase of 2–3 weeks of age. Although the dKO mice appeared normal after birth and until 2 weeks of age, they started showing severe skeletal muscle atrophy after 2 weeks. Interestingly, the dKO mice also showed low glucose and high cholesterol levels—a sign of impaired nutrition.

In 3-week-old dKO mice, the production of other skeletal muscle MyHCs, such as MyHC-I, MyHC-IIa, MyHC-neo, and MyHC-emb, was elevated. However, this increase could not compensate for the loss of MyHC-IIx and MyHC-IIb. The deficiencies in motor function were further evinced by the abnormal sarcomere structures observed in dKO mice. Overall, the findings indicate that the simultaneous loss of these two key skeletal muscle MyHCs is significantly detrimental to postnatal skeletal muscle function in mice.

Senior author Dr. Kunihiro Tsuchida, a Professor at the Institute for Comprehensive Medical Science, Fujita Health University, muses, “The double MyHC knockout experiments indicated that myosin deficiency causes the activation of various signaling pathways that trigger skeletal muscle atrophy. In amyotrophic mice, the microstructures necessary for muscle contraction collapse.” He adds, “The phenotype of the dKO mice was similar to that seen in humans with cancer-induced muscle atrophy. Thus, these dKO mice could serve as a useful animal model and provide insights for developing therapeutics to combat muscle atrophy and muscle-related diseases in humans.” 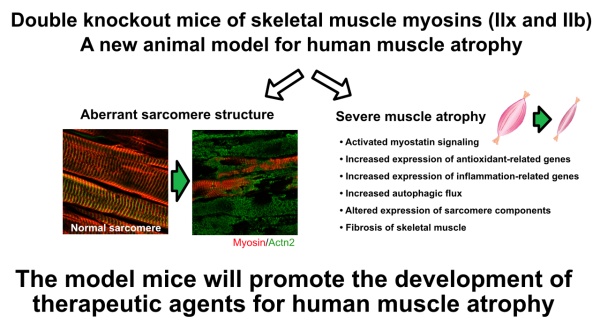 Dr. Keisuke Hitachi is a Senior Assistant Professor at the Institute for Comprehensive Medical Science, Fujita Health University, Japan. His research employs animal models and cell culture and focuses on the molecular mechanisms of intractable neurological illnesses, striving for the development of treatment strategies in the future. He has been the recipient of the Young Investigator's Award from The Muscle Society of Japan and has more than 50 publications in renowned journals, with over 1000 citations.

Dr. Kunihiro Tsuchida is a Professor at the Institute for Comprehensive Medical Science, Fujita Health University, Japan. His research group focuses on the disease pathophysiology and development of therapies against neuromuscular disorders through nanomedicine, cutting-edge ncRNA analyses, exosome research, and cytokine signaling pathways. He has won multiple awards, including one as a Researcher for Intractable Diseases at the Aichi Doctor Association, and has over 180 publications with more than 10,000 citations.

This study was supported in part by JSPS KAKENHI (19H03427 and 20K07315), Intramural Research Grants (2-5) for Neurological and Psychiatric Disorders of NCNP, Japan Sports Agency, MEXT-Japan, Research and Development Project on Anti-Doping Science (JADA2105 and 2205), and Grant-in-Aid from the Takeda Science Foundation.