Diagnosing psychiatric disorders is challenging due to the lack of objective tests. Fortunately, genomic studies can reveal genes associated with increased risk of certain disorders. In a recent study, researchers from Japan investigated whether the genetic correlations between major psychiatric disorders differed among European and East Asian populations. They showed differences in how bipolar disorders are diagnosed by psychiatrists in the East and the West, which might affect the results of clinical trials.

While this problem is still prevalent today, we have a few additional tools at our disposal that could soon assist psychiatrists in their diagnoses. For example, genomic studies may be used to identify genes that put a person at a greater risk of developing a specific disorder, although they cannot provide perfect information theoretically. However, genetic correlation analyses have shown that different psychiatric disorders have certain degrees of shared genetic risk. Such were the findings of a recent analysis of the Psychiatric Genomics Consortium datasets, for which scientists calculated the genetic correlations between major psychiatric disorders including schizophrenia, bipolar disorder, and major depressive disorder.

The abovementioned analysis, however, was conducted on a dataset containing samples from mostly Europeans. This motivated a research team led by Professor Masahi Ikeda of the Department of Psychiatry at Fujita Health University School of Medicine, Japan, to compare these genetic correlations with those obtained from an East Asian population. The aim was to determine whether there are any marked differences in the results for Eastern and Western people at large, and discuss what the origin of such differences could be. This study was co-authored by Takeo Saito and Nakao Iwata, also from Fujita Health University School of Medicine, and published as a research letter in Psychiatry and Clinical Neurosciences on 25 October 2022.

The researchers focused mainly on bipolar disorders (BDs), which can be classified based on the degree of ‘extreme moods’ as BD subtype I (manic and depressive states) and BD subtype II (hypomanic—which is a milder form of manic—and depressive states). The results of the genomic analysis revealed that in the East Asian population, the genes of patients with BD subtype I were more correlated with those for major depression. This was in stark contrast with the results for the European population, for which BD subtype I was more genetically correlated with schizophrenia. On the other hand, the genetic correlations between BD subtype II with schizophrenia and depression were similar when comparing the East Asian and European populations.

The bottom line is that these differences in diagnostic (or ‘enrollment’) tendencies should be noted by psychiatrists when analyzing data, especially the results of clinical trials. “We are not trying to say that either diagnostic approach is superior, but rather that if this trend is also occurring in clinical trials, it may affect evaluations of drug responsiveness,” remarks Professor Ikeda, “This is especially true for second-generation antipsychotics, which are presumed to be more effective for symptoms such as delusions.”

In an accompanying paper, Professor Ikeda and colleagues analyzed the possible influence of these diagnostic trends in clinical trials. Hopefully, further studies such as these will let us accurately use genetic variants as supporting diagnostic criteria for psychiatric disorders. 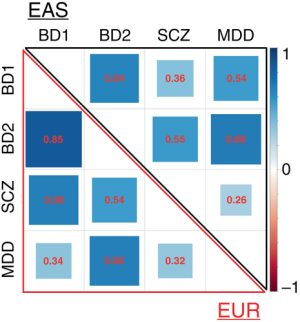 Image caption: The red numbers indicate the genetic correlation between bipolar disorders (BD) subtypes I and II, schizophrenia (SCZ), and major depressive disorder (MDD). The top triangle corresponds to the results obtained for an East Asian (EAS) population, whereas the bottom triangle corresponds to the results derived from a European (EUR) population.

Dr. Masashi Ikeda is a Professor affiliated with the Department of Psychiatry at Fujita Health University School of Medicine. He specializes in interdisciplinary research combining psychiatric disorders with genetics. He has over 200 publications to his name on such topics, with more than 18400 citations. He is also President of Genonics Ltd., a company that offers genetic testing services.