One undergraduate student (Faculty of Radiological Technology) has joined our group.

We offer laboratory research opportunities of senior thesis to undergraduate/graduate students of School of Medical Sciences/Graduate School of Health Science, both in Faculties of Medical Technology and Radiological Technology. Research will be performed using a variety of principles in biochemistry, molecular biology, cell biology, immunology etc. Our goal in education is to develop human resources who can actively work in various research fields; not limited to hospital laboratory engineers or radiological technologists. Graduate students will be trained not only to design and conduct research but also to present/discuss their research as independent researchers. 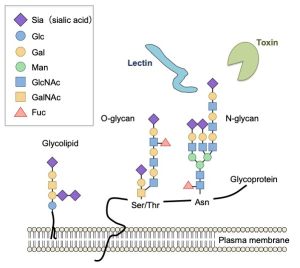 Sialic acids exhibit very specific expression patterns in mammals. Humans specifically lack the activity of CMP-Neu5Ac hydroxylase that catalyzes the biosynthesis of Neu5Gc, one of the two major sialic acid species in mammals. However, human uptakes Neu5Gc by eating Neu5Gc-containing food, such as red meat. Then, non-self Neu5Gc is expressed on the cell surface as ”xeno- autoantigen”, a uniquely acquired self-antigen. Moreover, Neu5Gc is antigenic in human immune system, that is, human has anti-Neu5Gc antibodies. As a result, Neu5Gc is reported to be a target for chronic autoimmunity. To understand immunological impact of this human-specific reaction to xeno-autoantigen for inflammatory diseases, we are trying to establish human-model mice using Neu5Gc-lacking mice. 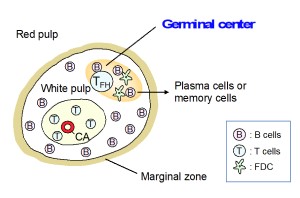 The germinal center is a microenvironment essential in acquired immune response to produce high-affinity antibodies. Neu5Gc is the major sialic acid species in mouse resting lymphocytes. We revealed that Neu5Gc expression is suppressed in B cells after the activation by antigens. This Neu5Gc suppression means the decrease in ligand for CD22 that negatively regulates B cell activation.
GL7 is a monoclonal antibody specifically staining the germinal centers, although its epitope was unknown. We found that GL7 recognizes the activation-dependent Neu5Ac induction (=decrease in Neu5Gc) in mouse lymphocyte (Neu5Gc is also suppressed in activated T cells). In addition to GL7, several antibodies or lectins recognizing specific glycan structures have been used as markers for the germinal centers. We are studying novel glycan functionalities in germinal centers as drastic changes in glycan structure occur in the site for immunological reasons. 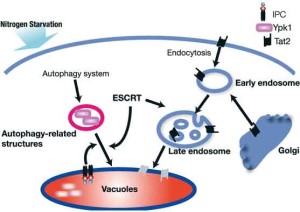 ISP-1/myriocin is a new type of immunosuppressant isolated from the entomopathogenic fungus Isalia sinclairii. The structure of ISP-1 resembles to that of sphingosine and ISP-1 was revealed to inhibit the biosynthesis of sphingolipids. We identified YPK1, encoding an AGC family serine/threonine-protein kinase to control protein translation, as one of the components of sphingolipid signaling genes in yeast. This sphingolipid-regulating protein kinase expression is controlled by the nutrient status of cells. Ypk1 is selectively degraded under nitrogen starvation. This seemed to be the case that nutrient-spending Ypk1 is degraded in advance to the bulk protein degradation of autophagy. Ypk1 degradation required specific transportation to vacuoles. We are currently analyzing the molecular mechanism in such intracellular transport system. 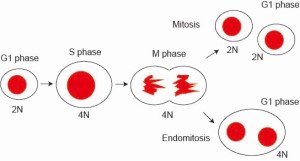 Lyso-sphingolipids are sphingolipids with sphingosine (not conventional ceramide) and hydrophilic head group. Psychosine is a lyso-galactosylceramide, consists of a galactose and a sphingosine. We found that psychosine has an activity to convert otherwise mitotic cells to get into “endomitotic” cell cycle, which skips cytokinesis of M-phase of cell division. Endomitosis is utilized for production of big multiploid cells such as megakaryocytes, precursor cells to platelets. We are currently trying to identify cellular components, which we call “endomitosis module”, required for psychosine-triggered endomitosis, to ultimately understand molecular mechanism of this giant-cell producing cell division. 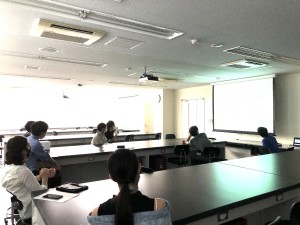 We have lab meeting once a week. Lab staffs and graduate students present their progress in research project. In journal club, we discuss recently published articles.

We have seasonable events such as welcome party, farewell party, after exam party, year-end party, laboratory trip etc., although these events are currently cancelled because of COVID-19.